Posted on January 1, 2010 by Anthony Olszewski 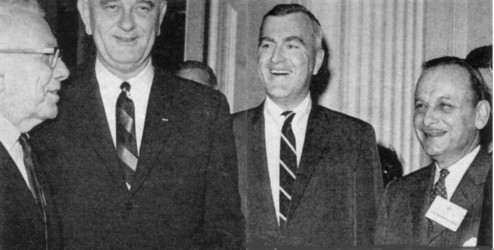 In 1964, while he was serving as the cochairman of the Canadian-American Interparliamentary Group, Democrat Gallagher was received warmly by President Johnson at the White House.

I once met Congressman Gallagher at a Knights of Columbus hall in the Jersey City Heights. I remember him as being very old and very tired. Walking up the block after leaving the K of C my mother remarked, “They say Congressman Gallagher is owned by the Mob, but he’s always been a good friend of your grandmother’s.”

That was around forty years ago. Today, my grandmother is dead; my mother is dead; the Knights of Columbus building is gone and the Mob is to a large part made up of shadows now, too. But, Cornelius Gallagher is very much still here. He appeared hardly any older than what I remembered and seems to be enjoying the benefit of a good rest. He spoke for two hours — on his feet and without notes.

When I was young saying that someone was a “real politician” was a compliment. The meaning was that the person was well-dressed, affable, and a good public speaker. Cornelius Gallagher is a real politician.

Congressman Gallagher served from 1959 to 1973, during the Administrations of presidents Eisenhower, Kennedy, Johnson, and Nixon. Cornelius Gallagher worked in JFK’s presidential campaign.

Congressman Gallagher contends that after beginning to investigate the government’s assault on privacy he was hounded from public life by J. Edgar Hoover.

The Congressman equated what he calls the replacement of the Constitution by the Patriot Act with government spying by Robert Kennedy and J. Edgar Hoover. Cornelius Gallagher claims that Harvard University was a hotbed of mind control — Manchurian Candidate — research and that the Unabomber was the result. Gallagher also points out that America today lays claim to a military empire through over one thousand bases overseas.

The Congressman reflected on a wide range of historical figures including Roy Cohn, Joe McCarthy, and Cardinal Spellman — a self-described “simple man;” Gallagher’s comment: “as simple as Sadam Hussein.” Cornelius Gallagher also described visiting war-torn India during the Bangladesh conflict. On his return to the US, the Congressman briefed President Nixon. Nixon called in National Security Advisor Henry Kissinger who Gallagher reports as commenting, “That broad (India’s Indira Gandhi) is always getting heated up.”

Gangster Joe Zicarelli was a New Jersey capo in Cosa Nostra
Life reported that there were ties binding the congressman and the hoodlum in an alliance of interests.

Contemporary accounts associated Congressman Gallagher with the Mafia. Cornelius Gallagher called these fabrications by a spiteful J. Edgar Hoover. Gallagher says that his only meeting with Joe Zicarelli was when the Bayonne crime boss introduced the Congressman to a Cuban soldier. This disillusioned former follower of Castro wanted to inform the US that Russian soldiers and engineers were building missile silos in the mountains of Cuba. This was under Eisenhower, two years before the Cuban Missile Crisis. Cornelius Gallagher says that he only met with Tino DeAngelis when the salad oil mogul’s empire was about to collapse. Gallagher described DeAngelis not as a salad oil swindler but a successful local businessman who was a victim of the big outfits. The Congressman says that he only met Harold Konigsberg (hit man, serial killer, sadist, and sex criminal) once when the Bayonne resident introduced himself to the then Freeholder Gallagher. Gallagher paints “Kayo” Konigsberg as a local “character,” one of many in Bayonne. Cornelius Gallagher denies that he called Konigsberg to remove a corpse from the Congressman’s home.

There was a good-sized crowd at this Bayonne Historical Society event, filling most of the seats in the Library’s upstairs meeting room. Boxing great Chuck Wepner was among those attending.

Some stories from Cornelius Gallagher’s talk:

Gallagher poses happily with Boss John V. Kenny (right), who declares that the congressman was a “victim of an outrageous assault – but I’m with him 100 percent.”