Essex Street, once the most aristocratic portion of Jersey City

Posted on April 6, 2010 by Anthony Olszewski 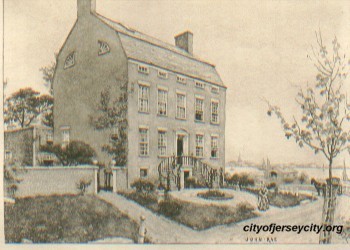 At the end of almost forgotten Essex Street, once the most aristocratic portion of Jersey City, there is still standing the imposing remains of Colonel Richard Varick’s Prospect Hall, now fallen to the low estate of a tenement-house. The old mansion, which is of red brick and formerly had a pitch roof, was erected in the year 1807 by the jolly anecdotal Paulus Hook ferry-keeper, Major Hunt, whom Washington Irving mentions in his gossipy “Salmagundi” as a good story-teller. It was sold by him about a year later to Colonel Richard Varick, of New York, who, with Anthony Dey and Jacob Radcliff, two prominent leaders of the New York bar, founded the little city of Jersey, which they fondly hoped would some day rival the great metropolis across the river.

Colonel Varick was one of the most interesting figures in our early history. He was General Washington’s private and military secretary during the latter part of the Revolution and a member of his household, and previous to that had acted in a like capacity for General Philip Schuyler. Later he was appointed inspector-general at West Point, on the staff of Benedict Arnold, and he held that position until taken into the personal service of Washington. In early life he married Maria Roosevelt, the eldest daughter of Isaac Roosevelt, the president of the Bank of New York and owner of the finest residence on Queen Street. After the war he became mayor of New York, and was in office during the city’s brilliant period as the seat of government, successfully guiding its corporation into the new century.
. . .
The simple Hunt house facing the bay he immediately enlarged and improved, until in point of elegance it surpassed many of the finest dwellings of Gotham. The proprietor of the “Frenchman’s Garden” at Bergen (The “Frenchman’s Garden,” a fashionable recreation spot for early New Yorkers, is now included in the present “Macpelah Cemetery”), Andre Michaux — of whom a delightful fiction was current that he was the unfortunate Dauphin of Louis XVI — was engaged to plan his garden, which ran to the waterfront. He must have succeeded admirably, for memories of the rare flowers in grotesquely shaped beds, and especially one long avenue of imported plum-trees, still linger in the minds of a few old Jersey citizens. It is said to have also contained the first of the Lombardy poplar-trees which were planted along the city’s early streets.
. . .
Colonel Varick, accustomed as he was to the best society of his time, must have been disquieted by the class of people which came to reside permanently in the city for which he had predicted so brilliant a future. Before the thirties few good substantial families made their appearance, most of the inhabitants being of so very low an order that missionaries came over from New York, notably Dr. Barry, the early pastor of St. Matthew’s church, to try and work reforms and abolish the bull-baiting and cock-fights which disgraced place. It was then considered unsafe for an unarmed man to be abroad at night, and a woman on foot after dark lost her reputation. A watch guarded the streets after the vesper hour, calling out at intervals the time of night and all’s well.

The city of Jersey which Colonel Varick knew was very different from the large and constantly growing Jersey City of today. Grand Street, the principal thoroughfare, was a wide, shady avenue with great old trees on either side, whose interlacing branches nearly shut out the sky. Through it the heavy English mail coaches, the successors of the old wooden flying machines, came from the North, South, and West. Their destination, the Lyons Hotel, later called the Hudson House, was quite a famous stopping-place for travelers, and afforded accommodation equal to any in the city of New York. Under the management of Joseph and William Lyons, some years before the establishment of Judge Lynch’s Thatched Cottage Garden, it had a nicely laid out park before it with many little rustic summerhouses on the waterfront. There guests tired after long and tedious stagecoach journeys could rest and enjoy the invigorating sea-breezes and the view of the beautiful shore line opposite.

It was from this old-time hostelry, a small portion of which is still standing, that the Marquis de Lafayette set out on his farewell tour of New Jersey. In its parlor, called the “Long Room,” one hazy morning in September of the year 1824, he was introduced by Governor Williamson to the chief officers and leading citizens of the State. There was one among the many comprising the distinguished gathering who needed no introduction, and that was Colonel Varick, whom the aged marquis joyfully embraced as an old friend, and presented with a souvenir from La Grange, in the shape of a valuable piece of Sevres. The reception committee, following Colonel Varick’s suggestion, had General Washington’s coach brought out from the Varick stables to bear the old hero to Newark, and drawn by six white horses, with its cream brocade interior carefully dusted and its panels newly varnished, it is said to have made a most impressive appearance. General Lafayette left the city of Jersey with a promise to pay Colonel Varick a visit on his return journey, which promise he kept before bidding good-by to America.

An old resident who lived when a boy directly back of the Varick coach-house on Morris Street, then better known as “Dishwater Lane,” remembers seeing the general and his son George Washington Lafayette walking through the Varick Garden when on their way to pay this memorable visit. He distinctly recollects the personal appearance of the aged Frenchman and his youthful son, and dwells on the curious crowd which followed them, eager to pay homage to the hero of the hour.
. . .