Posted on April 8, 2010 by Anthony Olszewski 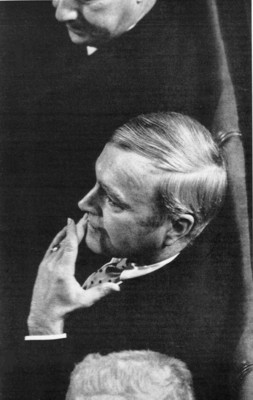 In appearance silver-haired, ruddily handsome Congressman Cornelius E. Gallagher is the image of a dedicated public servant.
Originally appeared in Tiger In The Court
Memoirs of Hudson County

A lot of legwork was required to discover where the money wound up. One lead came from an unrelated inquiry. Internal Revenue had been investigating Congressman Cornelius Gallagher, who had purchased more than $948,000 worth of municipal bonds – for cash! “If you’re going to charge a man with tax evasion,” Stern says, “you have to prove that he’s not just a conduit for funds, but that he’s buying the bonds for himself. The only way you can do that is to find out who’s clipping the coupons.

“When you have a bearer bond, it’s not registered in anyone’s name – that’s what the phrase bearer bond means. It’s like money. Anyone can clip the coupons, walk into a bank, fill out a form and submit them for payment. And he can do it in any bank in the United States. Obviously, the IRS can’t run to every bank in the country to find out who’s cashing coupons.

“IRS did a fantastic job. They went back to the issuing municipalities to see where the coupons had come from, then checked back to determine who had cashed them. It turned out that something like four hundred thousand dollars of the bonds Gallagher had bought were in a Florida bank account and being clipped by the bank.”

So the IRS agents checked at the First National Bank of Miami Beach and discovered that the bonds had been deposited-not by Gallagher, but by Jersey City’s mayor, Thomas Whelan, and council president Thomas Flaherty. The two Jersey City officials maintained joint numbered accounts that, at their peak, had deposits of $1,232,433.30 – all in cash or in negotiable bonds purchased for cash.

A second cache of bonds was uncovered-and recovered-when IRS agents started checking the bank and brokerage records of William A. Sternkopf, Jr., the former Hudson County auditor who had gone on under Kenny’s patronage to commissionerships first on the New Jersey Turnpike Authority, then on the bistate Port of New York Authority, which operates the metropolitan area’s docks, bridges, tunnels and airports.

On one of Sternkopf’s bond purchases, the records at Lehman Brothers, the giant Wall Street investment house, carried the notation that the bonds had been bought for John V. Kenny. Tracing the trail of the transaction, the IRS agents discovered that Kenny had bought $700,000 in bonds through Sternkopf – all for cash, delivered to the bank by the Hudson County police chief, Fred J. Kropke.

Through a tip from a still-undisclosed informant, the U.S. attorney’s office learned that $300,000 of the bonds were stashed in the suite of Pollak Hospital administrator Paul Hanly, Kenny’s son-in-law, and the remaining $400,000 at the Jersey Shore home of his granddaughter, Margo Hanly Hermann. Both were haled before the grand jury.

Hanly took the Fifth Amendment, escaping ouster by resigning – only to have Kenny name his son, John, as his successor. Mrs. Hermann, after invoking the Fifth Amendment, was given immunity and she told where the bonds were. They were subpoenaed as evidence. Lacey said they represented “plunder unmatched by anything in my experience. You’d have to go back to the days of Boss Tweed.”