Jersey City, the most important transfer point of the Underground Railroad. 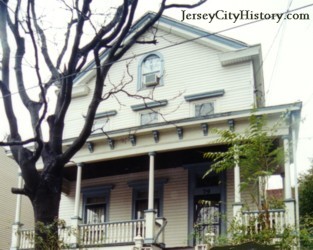 . . .
These hiding-places were known as Stations, and the friends of freedom were known as Station Agents. Jersey City, by reason of its geographical position, was perhaps the most important transfer point in the East, and it is this fact that calls for special attention at this time.
. . .
The exodus from slavery extended all along the Pennsylvania border, though the short cut across Delaware from the Chesapeake and the banks of the Susquehanna were favored routes. All these minor routes led to New Jersey, where there were four regular lines of communication, all converging in Jersey City.
. . .
After sleeping the most of the day in strict seclusion, the fugitives were brought to Jersey City. There John Everett or Peter James Phillips, or some agent of theirs, took them in charge.

From Jersey City, the escaped slaves were taken to the Hudson River Passenger Station at the corner of Church and Chambers Streets, just in time for a night train for Albany. If this station were too closely watched, the fugitives were taken to a house on West Broadway where Lewis Tappan and his brother Arthur conducted a Sunday School for adult African-Americans. This afforded temporary shelter until it was safe to travel.

Frequently it was decided to ship the escaped slaves to river ports up the Hudson. The small sloops and schooners, and even the coal-laden canal boats, were utilized for this purpose. Some of these small vessels arrived at Harsimus Cove at the foot of Washington Street with brick and building material for Washburn & Campbell. Some brought lumber for Samuel Davidson at the foot of Montgomery Street — his wharf being about where the First National Bank now stands. Others carried lumber for Morrell and Van der Beek, in the neighborhood of the foot of Steuben or Morgan Street.

The canal boats which were towed to up-river points loaded with coal were sometimes used. The skippers were willing to run some risk in exchange for free labor from the fugitives — a very desirable item in windy weather on a canal boat, which requires constant pumping because of limited freeboard. Whether each shipment was a separate transaction with the skipper or was known to the principals must remain a mystery. It seems probable that they knew of it, but prefered not to acknowledge it, for prudence dictated seeming ignorance.

The general route led by the Newark or Belleville turnpike along Newark Avenue to the ferry, and thence to the railroad station in New York. Spies watched the wagons arriving after dark. The necessity of paying ferriage on the cargo made it compulsory for drivers to tell the ferrymaster that there were passengers in the covered vehicle. Sometimes the spies caught sight of the fugitives, and captures and escapes were frequent. For this reason, there were always men in the crowd who knew how to guide the fugitives. And there were runways known to these guides which led to safety.

Sometimes the runaway slaves were hurried to the home of Dr. Henry Holt in Washington Street, where a rear entrance gave egress on Plymouth Street. Friends directed the hunted souls to New York by way of the Hoboken ferry to Barclay Street. Sometimes they were led to the foot of Washington Street or to the lumber yard wharf near the ferry. Sometimes they were taken to the foot of Hudson Street and hidden in the coal boats. Mr. Daniel Van Winkle of The Historical Society of Hudson County was a witness to one of these escapes. The guides shook off the pursuers and reached a coal-laden boat discharging a cargo. In that docked vessel, the runaway was placed in a small cave-like compartment beneath the cabin of the boat, the entrance to which was then covered in coal. There, half smothered by coaldust, the fugitive remained in hiding until the pursuit ceased. Then he could be dug out and started again on his way to freedom.
. . .
Read the complete article