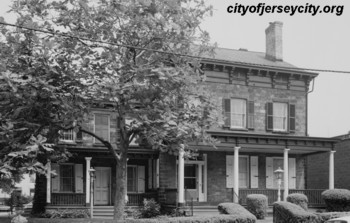 The Apple Tree House is located at 298 Academy Street, just a few blocks from Journal Square
Photo by George Eisenman, 1967

From Historic Houses of New Jersey by W. Jay Mills, 1902>

About a hundred yards away from the Sip Manor, and just off Bergen Square, on what is now known as Academy Street, is an imposing stone dwelling, covered with aged ivy vines. It used to be called, by the early residents of Bergen, Apple-tree House, owing to the fact that Generals Lafayette and Washington dined under the shade of a great old appletree in its orchard when planning the retreat through the Jerseys.

The house was then owned by Hartman Van Wagenen, a member of a prominent Bergen family, whose descendants retain it today. At the time of its erection, in the seventeenth century, it was one of the largest buildings in the village, and although slightly modernized in the first half of the nineteenth century, is still a fine specimen of an old Dutch homestead.


General Washington often stopped in Bergen during the first year of the war. There is a tradition that he presented a lace handkerchief to a member of the Van Winkle family when visiting the Stuyvesant tavern, at the foot of Glenwood Avenue. This time-kissed dwelling today, peering from behind aged vines and gnarled shrubs, seems to call out to the passers-by, “Look at me, I am the last tragic bit of the Bergen of true Dutchmen.” The Tuers and Dey houses are also said to have been visited by him, as well as the famous “Three Pigeons Inn,” which the brave Sergeant Champe rode past on his wild-goose chase after the deserter Benedict Arnold. But there is abundant proof that Washington did stop with Lafayette at the Apple-tree House, and there are many mute relics in existence, cut from the wood of the tree which sheltered them, that would tell us the story if they could.
. . .
Read the complete article.