Posted on February 13, 2015 by Anthony Olszewski 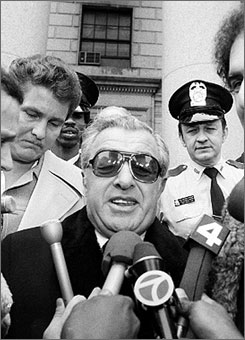 Teamsters Local 560 Boss Anthony Provenzano (Tony Pro) is believed to have been responsible for the disappearance and presumed murder of Jimmy Hoffa.

In the 60s (I simply can not remember when.), I received a call from Tony Pro. He said “Kid, come over to the office right away. I have someone here I need you to talk to.”

I left my law office in Jersey City and drove to the Local 560 office in Union City. When I entered Tony Pro’s office, he was standing next to a giant man with a huge red beefy face. The guy looked like he weighed 350 pounds or more. It was KO Konigsberg. I had heard of him but never met him.

Tony said “Kid, I need you to do a favor for Mr. Konigsberg here.” I asked “What’s that Tony?” He said “You are suing some of his people, and I want you to drop the suit.”

I did not know what he was talking about, but I called one of the layers in my office and found out that we had two clients who came in and retained us to start assault and battery complaints against some of KO’s “enforcers” who had beat them up when they failed to repay a loansharking debt.

I thought about this and went back into Tony’s office. He was now sitting behind his desk with Konigsberg sprawled out on a big blue couch. I looked Tony in the eye and told him what I learned and I said “Tony, what you want me to do is to double-cross my own clients?” He said “No, Kid, I just want you to do Mr. Konigsberg this favor.”

I said “Tony if I did that, would you ever be able to trust me again?” and I turned and walked out of his office before anyone could reply.

That afternoon my father, who was my law partner, got a call from Tony. Tony said “Jake, your kid has got some gallunes! I never saw anything like it. I want him as my personal lawyer. I am going to put him on my payroll for $25,000 a year. He is my lawyer!”

That money was a lot in those days, but Tony told the story all over the place. Even Jimmy Hoffa mentioned it to me — at the Eden Roc Hotel in Miami when he introduced me to and told the same story to Meyer Lansky. (We then all played gin. Lansky was a genius at gin. Remembered every card. No one could beat him. He had a cabana at the Eden Roc.)