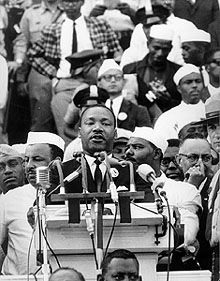 Delivering the “I Have A Dream” Speech in Washington DC
Just Behind Dr. King’s right shoulder is Jersey City Police Officer Charles Jackson, who served as security coordinator for the event.
Dr. Martin Luther King spoke at least twice in Jersey City. On September 21, 1965, he received an honorary Doctor of Law from St. Peter’s College. Dr. King gave an address titled “The American Dream.” The Martin Luther King, Jr. Papers Project at Stanford University does not have a copy of the text (or a recording) of the address.

I know of one recording was made of Martin Luther King speaking in Jersey City. At a grammar school assembly many years ago, I heard an audio tape – brought in by a parent of one of the students – of Dr. King addressing a Jersey City audience. I’m not sure if this was the St. Peter’s College event,the talk at A.M.E. church, or if it was of an appearance of Martin Luther King in Jersey City that is not currently documented.