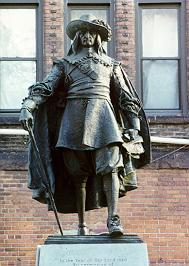 The Indians massacred the first two groups of Dutch pioneers attempting to colonize west of the Hudson. Peter Stuyvesant, Dutch Governor of New Amsterdam, ordered the third group of settlers to build their homes inside a fort. A statue of Peg Leg Pete still watches over the outline of that wooden wall where today Bergen Avenue forms a square at Academy Street.